In the footsteps of the Perfects

Carcassonne and the majestic Cité are the perfect place to start to follow in the footsteps of the Cathars, Perfects and other Bonshommes, called 'heretics' by the Catholic Church and the Kingdom of France. They were wiped out following the Albigensian Crusade and the siege of Montségur in 1244.
Head due north to climb up towards the Lastours and Saissac châteaux (20 mins). The other citadels are a two hour drive away, in the magnificent Corbières region.

On a bend on a small road, winding its way through Cabardès or Corbières, the 'vertiginous citadels' appear, majestic and untouched by the ravages of time. Beyond their historical role in a region marked by successive crusades by the Kingdom of France, the Châteaux in Cathar Country are also a spectacular natural feature.

The 11 châteaux in Cathar Country are being considered as UNESCO World Heritage sites, and they each have their own history, which makes up the bigger story.

Visiting the châteaux in Cathar Country is...

Cabaret, La Tour Régine, Surdespine and Quertinheux, are four royal fortresses, perched on an exceptional site, 15 km north of Carcassonne and 300 m above the village of Lastours. This powerful mining seigniory (the Romans had already mined gold there) had a rich economy before it was attacked by Simon de Montfort. After these conquests, the three towers were fortified and the Régine tower was built.

From the Belvédère, you have a wonderful view of this exceptional site. A great spot for that perfect photo!

The château de Saissac and its treasure

Located in the heart of the Montagne Noire, north-east of Carcassonne and a few kilometres from the lac du Lampy, the château de Saissac has a unique viewpoint, from where you can see the Pyrenees and the Carcassonne plain in fine weather. Once again, a perfect photo opportunity.

What's more...: Did you know? One of the oldest Royal treasuries was discovered in Languedoc at the château de Saissac. This monetary treasure was made up of 2000 deniers dating from the 13th century.

Today, a monetary museum tells the story of this treasure and the role of money in the Middle Ages.

Continue your visit at the other châteaux found south of Carcassonne…

In the middle of a pine forest, the forêt des Fanges, at 700 metres altitude, stands the château de Puilaurens. Like a ship wrecked on a rocky peak above steep drops, its crenulations have remained intact.

You can visit the donjon and the Tour de la Dame Blanche.

The château de Puivert or 'The Ninth Gate'

This is certainly one of the best-preserved châteaux! You reach it from the musée du Quercorb, a medieval musical instrument, along the sentier des Troubadours. This site has inspired the 7th art and numerous films were shot here, such as 'Béatrice', 'Winged Migration' and even Roman Polanski's 'The Ninth Gate' with Johnny Depp.

The château de Termes and the siege of 1210

Located an hour from Carcassonne and dominating the gorges de Termenet and the little, picturesque village of Termes, the château was the site of one of the most famous sieges, in 1210. The site is remarkable because of its castrum, built into the hill, which peaks at 460 metres.

The château de Villerouge-Termenès and the last 'heretic'

One of the rare châteaux, located in the heart of a magnificent, medieval village in a small valley in the Hautes-Corbières. It is, above all, a highly symbolic site, as it was the sordid setting for the massacre of the final Cathars in 1321, including Guilhem Belibaste, the last Perfect. A visit to the château (a fine example of 13th century military architecture) and its rooms evokes the colours, flavours and daily life in the Middle Ages.

What's more...: unique in Europe: the château's medieval restaurant, la Rôtisserie, with crockery, recipes and decoration from the Middle Ages.

The château de Peyrepertuse, as big as the Cité de Carcassonne

It is called one of the 'Five sons of Carcassonne'. It is also one of the most impressive of the châteaux in Cathar Country, with 2.5 km of ramparts! Its area (equal to that of the Cité de Carcassonne) and its presence on top of an 800 metre high ridge make it one of the most spectacular. The view over the Corbières, the vines and the scrubland is absolutely grandiose!!!!!!

What's more...: The medieval festival in August. Groups from all over France breathe life into this fortress and add sparkle to the medieval village.

The château de Quéribus, on the 'roof' of the Corbières

Surely, Quéribus is the Cathar Country château with the best panorama in the Corbières, with a view of both the Mediterranean and the Pyrenees. Perched on a rocky peak, at an altitude of 728 metres, it overlooks the village of Cucugnan, made famous by the Priest immortalised by Alphonse Daudet. The famous tale is performed in the théâtre Achille-Mir in the heart of this pretty village in the Corbières.

To access it, you have to cross no fewer than three walls built on the steep slope. On a visit to the château, which takes about an hour, you will see the magnificent donjon and Gothic-styled room and elements linked to daily life in medieval times.

The château de Montségur, in Ariège, is intimately and tragically linked with the history of Catharism. The long-time headquarters and capital of the Cathar church, it was here that, after a terrible, 11 month siege that the King of France and the Pope decided to put an end to the people they called Heretics. 200 people were burnt alive.

A museum, with its 3D display of the ramparts and village at the time of the Cathars, completes the visit.

Did you know? Searching for Cathar treasure
There is still a mystery about the final location of what was known as 'the Cathar treasure'. After the fall of Montségur, some Cathars fled (with the treasure?) towards Italy. This treasure may be that of the Visigoth King Alaric. It has even been suggested that the famous treasure was found by the abbé Saunière in Rennes-le-Château at the beginning of the 20th century.

A brief history of the Cathars

The birth of heresy: Historians place the appearance of a mysterious 'heresy' between the 10th and 12th centuries in the Midi in France. South of the Loire, people spoke the language of Oc. Inspired by Roman civilisation, relationships between the powerful were codified. The towns of the Midi and Aquitaine had their own consuls who spoke to the lords on an equal footing. The troubadours sang about love and honour. Within this context, many religious people aspired to make the religious practice more simplistic. Catharism was created on these foundations, as an aspiration for purity of the soul.

The Cathars or Albigensians developed, in their daily life, a requirement for the simplest relationship between people and God and a return to faith not lost in the luxury of the Church. Their life was positioned between Good and Bad. The Good was the only route to a pure soul. Among them, the Perfects and the Bonshommes acted in the role of the priest, often going without food and rejecting all the sacraments.

Two deadly crusades: The expansion of Catharism was seen by the Catholic Church as a real threat. Two crusades (in 1209-1218 then in 1226) were led by the Kingdom of France. For the King of France, it was, above all, about dominating the whole of Languedoc and Aquitaine. Many faidits, Languedocian barons who had been dispossessed of their land, stood by the Cathars, against the barons of the north. Simon de Montfort was the famous leader of the Albigensian crusade. This northern puritan opposed Raymond VI of Toulouse, who was a symbol of the 'free south'. An opposition of men, an opposition of culture. The fight against the Cathars ended with the fall of the fortress at Montségur in 1244.

GREAT OFFER
Explore the 21 sites in Cathar Country: 11 châteaux, 7 abbeys, 3 medieval cites and 2 museums.
The Passeport is on sale for €4 at the welcome desk in each site. It's valid for a year and it gives you a  €1 reduction on full adult rate and €1 reduction for an accompanying adult or child.
The Cathar Country sites
The Quality Pass 'My holiday advantage' gives you benefits on different services: restaurants, leisure, tourist sites… there's something for everyone.

Aude, the 'biggest beach' on the Mediterranean

Aude is also the Mediterranean Sea and 50 km of beaches! Discover the seaside resorts on the Mediterranean coast and all the different activities: water sports, hiking in the Natural Park of la Narbonnaise, windsurfing, sailing...

A beach for everyone 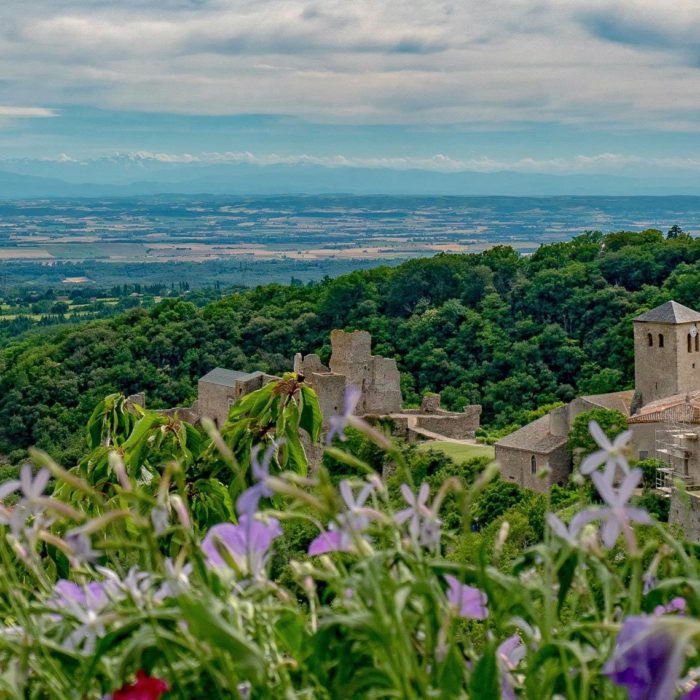 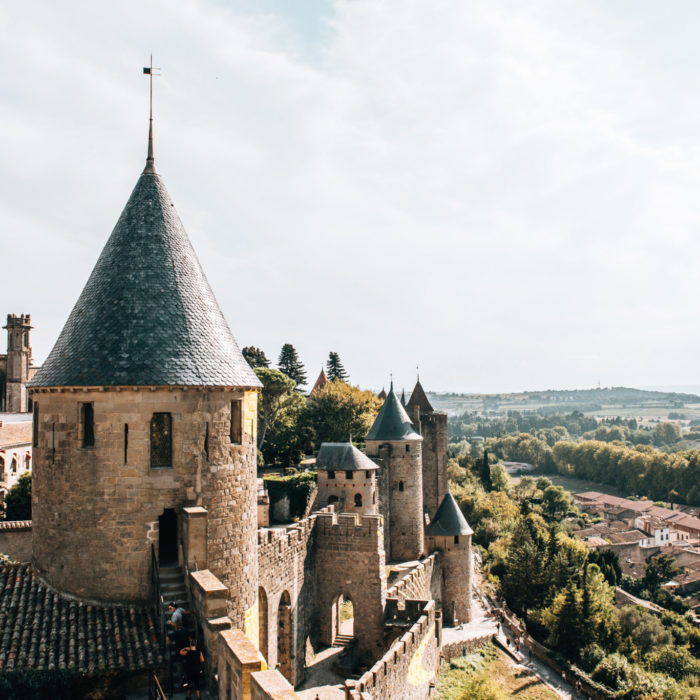 Once upon a time... The Cité opens its doors for a getaway, whether you choose…