Fun at the lake, walks and wine in Malepère!

Just a short distance from Carcassonne and the Cité,
this Pyrenean Piedmont is a wonderful setting for walkers, far from crowds and at your own pace.
The GR78 crosses the area before it continues to Santiago de Compostela.
There are also may circular villages, such as Alairac and Preixan.

7 kilometres from the centre of Carcassonne, a landscaped natural area is open to all. The lac de la Cavayère, is a perfect, rare spot for swimming, with sandy and grass beaches. There are picnic tables and a 5km path around the lake. There's all that and much more, with a range of activities. Let's start with the O2 Aventure treetop walking, in the middle of pine trees, and the spectacular zip wire over the water. At la Cavayère, you can find peace and quiet on a paddle or pedalo, or something altogether more thrilling at the parc Aquaviva. The bravest might want to try the biggest water jump. Crazy golf and beach football and beach volleyball pitches complete what's on offer.

From Arzens to Alairac via Lavalette… from walking to wine tasting

The famous actor, Philippe Noiret laid his hat here many years ago and used to love finding hidden corners on horseback. Malepère, with vines and gentle hills, is an introduction to the sweeter side of life.

Those who enjoy waking can combine history with nature as they leave Carcassonne for the famous GR78, 'the Piemont Way'.
This route, which continues as far as Santiago de Compostela, will reveal the hidden treasures of Malepère, alternating fields of sunflowers and wheat with vines and hills.

Here, the combination of the Mediterranean and Oceanic climates has shaped the land. Why not take a break in one of the pretty villages in Malepère, like Lavalette or Alairac? This circular village dates from around the 11th century. Then, you can continue towards Arzens, 15 kilometres away.

Travelling south out of Carcassonne, on enter the Razès, a former Carolingian county, dating from the 8th century. We stop first in Leuc, 10 kilometres from Carcassonne in the direction of Limoux. There, we can see the 14th century church, which is now home to the town hall, and the Church of Saint-Pierre which contains... a Roman sarcophagus.

Three kilometres further on, there's another example of a circular village, so typical of the region, in Alaigne. It has two imposing entrance gates into the circular village, like in Montclar and Preixan. It's worth noting the various cellars and estates that are open, where you can be introduced to the PGI such as the wines of the Cité or those from the AOP Malepère which distinguish themselves by the use of Atlantic grape varieties, of the merlot type.

The circular villages, typical of the South
The circular villages were constructed around the village centre, usually a fort. These villages are typical in the south of France, and particularly in Aude. Built around the year 1000, some historians think that they mark the beginning or urbanism and land management. Actually, this urban organisation is due to adapting to the environment, and also a desire to defend the village, as originally the houses didn't have windows to serve as ramparts. 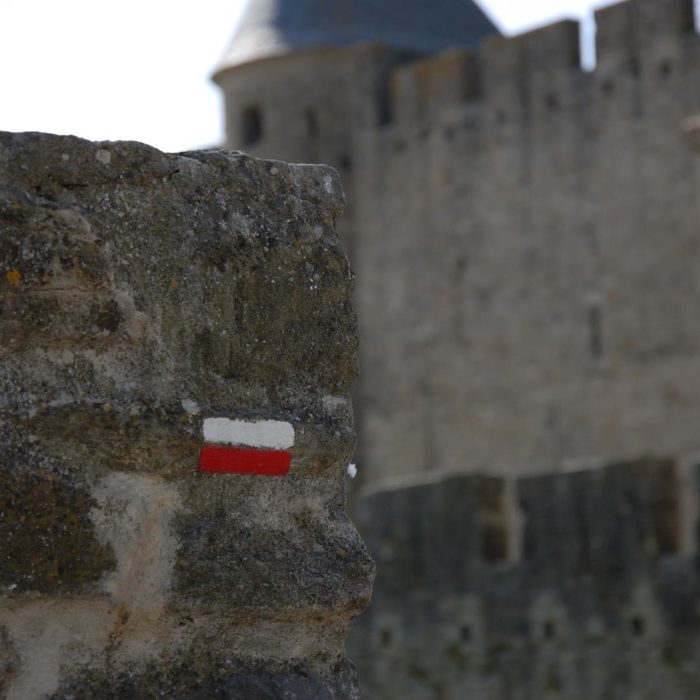 The Way of Saint James of Compostela

Greater Carcassonne, a centre for hiking Carcassonne is an important point on the GR78 hiking…

Browse through our ideas for a wonderful week's holiday, filled with sporting and cultural activities,…